We were able to book tickets today! Yeah. It was harder than I thought it would be as many flights were sold out. So, everyone will have a bit of a longer trip than originally anticipated. They will leave on June 27th and return on July 6th. There will be layovers both ways but I think it will be fine. I'd rather have a long layover than the 1 hour connecting flight we had in London....which caused our luggage to not make the flight...both ways! I'm feeling very excited. In 3.5 weeks hubby will be leaving to bring home our baby girl:) Now...for what I have left to do on the "to-do list"....so many things. I think tomorrow I'll be off to buy luggage! 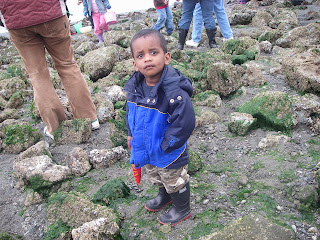 Cheetos in one hand...ready to explore the beach! 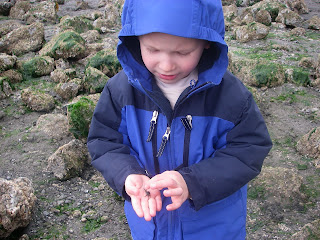 Holding the tiniest of crabs...they can't pinch you that way. 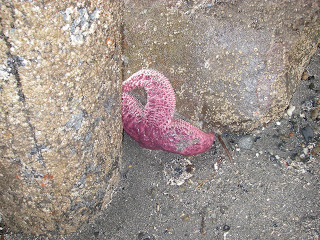 The little boys and I went on a field trip to the beach today. It has been horribly rainy and cold but we braved the weather. It turned out to be fine...overcast and not too cold. They had a blast looking for crabs and other sea creatures. I've never been so tired though after two hours of navigating the rocks, helping Busy Guy over the rocks, turning rocks over and bending down to pick up creatures. We came home, the boys had a bath, Busy Guy went down for his nap, and I laid down on couch after getting Tuba off the bus. Next thing I know it's 2 hours later and hubby is up and it's time to make dinner! Mr. P had crawled onto the couch next to me and fell asleep and Tuba was lying on the carpet sleeping! We had a quick dinner of pancakes...since nothing else was de-frosted. Now, I'm trying to ignore the disastrous kitchen that needs to be cleaned. I have to stand up to do that...but I can sit and type;)
Posted by Mama of 5 at 5:53 PM 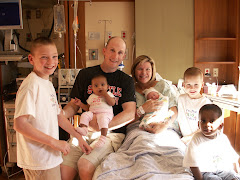